In autumn 2013 over pints at their local a group of postgrads from King’s College London pondered what they could do to engage the wider community of Finsbury Park in an exhibit on Old English in a single room of a small art gallery. This was not the first time these students had been asked to rack their brains to come up with some ‘alternative’ way to present their research (see blog post ‘Interruptions: new ways to know the medieval’). As before, they were a bit sceptical of the whole thing, but after a few drinks they came up with an idea—a visual, interactive wordhord.

And this is what we did.

The Old English wordhord is (rather obviously) defined as ‘a word-hoard, a store of words’.  It appears 7 times in Old English literature, only in verse, and is most commonly found alongside the verb onleac, ‘unlocked’ (twice in the poem Andreas, and once each in the poems Widsith, Beowulf and The Metres of Boethius):

‘Then Andreas by way of answering, wise in understanding, unlocked his word-hoard…’

…as does Christ incognito…

‘Again the Guardian of the way unlocked his word-hoard, the man over the gangway, spoke boldly…’

…as does the well-travelled poet Widsith.

‘The most senior answered him, the leader of the band, unlocked his word-hoard…’

…as does Wisdom personified.

‘Then Wisdom unlocked her word-hoard again, sang her own truths and spoke thus…’ 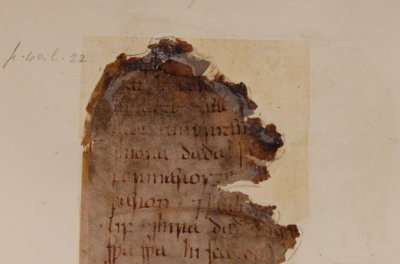 As with any hoard the contents of a wordhord are valuable, if not to everyone at least to the person doing the hoarding. These contents may be removed from the hoard under special circumstances when the hoard is ‘unlocked’. A wordhord represents a scop’s arsenal, the valuable raw materials of the poet or speech-bearer (OE reordberend).

Anyway, back to the pub and artsy community outreach. We thought, why not create our own wordhord? Our interest in Old English extends from the purely semantic to the historical to the poetic, and we could easily come up with a list of our favourite words. This could be our ‘hoard’. But why not open up the project to a wider community of Anglo-Saxonists and literature students all over the world? We decided that we’d open up our ‘hoard’ for a couple weeks, asking people via Twitter, Facebook and word-of-mouth to send us their favourite words of Old English.

Some of the entries came from tenured professors in the academic sector, but others came from people who had taken a required literature class as an undergraduate and had picked up some Old English bits and bobs on the way. Everyone who sent us words had this in common—they had taken pleasure in a word of a dead language, something totally ‘useless’ in the world of ‘You’re majoring in that? But what will you do with it?’ Quickly we compiled a list of favourite words. We asked Furtherfield Gallery to give us a blank wall, painted white, on the day of the event, plus several cans of black paint and paintbrushes. We started advertising our event—‘Disclosure: old words made new’—and eagerly awaited the day we would ask the community of Finsbury Park to build London’s one and only Old English wordhord. 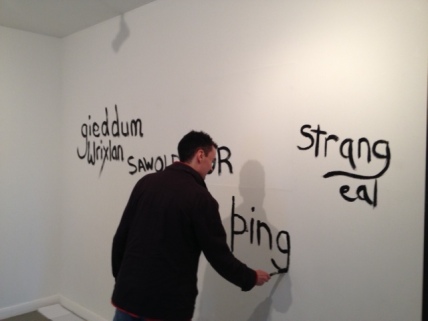 On the day of the event people stopped by the gallery on their Saturday afternoon stroll through the park. Many people hadn’t even heard of Furtherfield before, much less our event, but they saw that something was happening at the little gingerbread house of a gallery and stopped by out of curiosity. Inside the gallery we showed our visitors the list of words, asked them what they knew about Old English and told them about the words we had gathered. Some people remembered studying Beowulf in translation in school; others had even taken a one-off Old English module in university. Some people didn’t know a word of Old English, but it didn’t really matter what anyone’s literary background was. The task was to choose a word from our list, learn the meaning and paint it on the wall. These words on the wall were our wordhord. 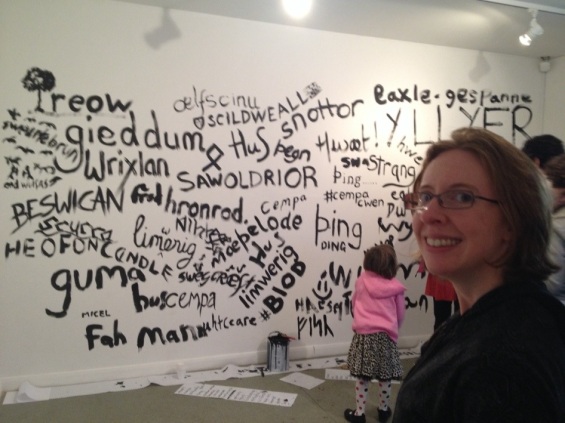 That’s me during a brief pause in wordhording.

By the end of the afternoon, our wordhord looked like this.

The contributions to our ‘hoard’ were fascinating. Not only did we have a collective of Old English learning from the list compilation we had done via social media for the past couple weeks, we also had a collage of local community responses to these words. We had scildweall (shield-wall) written as part of an actual wall, and treow (tree, also truth) with an illuminated capital ‘T’ (its burgeoning branches not so unlike the kind of decoration you’d find on a capital in a medieval manuscript). We had some particularly large words written near the ground at kids’ height, words that captured a child’s imagination like wyrm (dragon/snake/worm) and wyrd (fate). Some of the kids signed their names or painted smiley faces beside their work. Norse futhark (runes) made an appearance, as did a stick-figure illustration of a battle, an exclamation mark and some hashtags. One woman wanted to know what the word for ‘warrior-queen’ would be, and because we didn’t have an answer for her, we made up our own Old English cognate for her to use, cempacwen (lit. warrior-queen, but not actually found in Old English). My favourite part was when a little girl wrote her name—Teagan. Afterwards we were thinking, hey, doesn’t that sound a bit like an Old English verb?  So we looked it up and sure enough, teagan is Old English for ‘to dress’ or ‘to prepare’. This little girl Teagan taught us a new word just by signing her name! 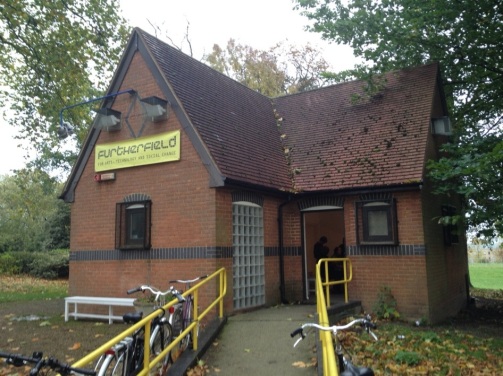 The day of the wordhord came and went. It was only a temporary exhibition; the wall has since been painted over and used for other purposes.

But I had enjoyed the wordhord too much to leave it to its fate as forgotten palimpsest of Furtherfield Gallery. I decided to give it new life in the form of an ‘Old English Word-of-the-Day’ Twitter account: @OEWordhord. Aside from giving me yet another way to avoid working on my dissertation, this Twitter account became a great way for me to keep on building my Old English vocabulary. It made looking up words more fun because this gave me new treasures to hoard. I enjoy seeing which words get retweeted the most (as of this post fastitocalon is number one by a long shot, followed by sceo) and reading people’s responses to different words.

So that’s how @OEWordhord got started and so shall it continue, because Old English is the dead language that refuses to die, hwæt!

Hana Videen has a Ph.D. in English from King’s College London. Her dissertation was about blood in Anglo-Saxon literature (poetry, hagiography, homilies, and medical texts). You can find out more about her academic interests on Academia.edu and visit her medieval blog beoshewulf. The Old English Wordhord is on Twitter and Facebook. If you would like to support the Wordhord, visit the Patreon page.

This site uses Akismet to reduce spam. Learn how your comment data is processed.